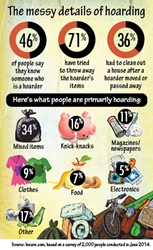 Junk piled to the ceiling, bugs on food, used cat litter, rat droppings, dead animals, stacks of fast-food cups, boxes of empty pill bottles, and used Band-Aids are among the items seen in hoarders houses by respondents to a new survey by Insure.com, an independent consumer insurance website.

According to a survey of 2,000 adults, 46 percent know someone who hoards, and 6 percent of people identify themselves as hoarders.

Among people who know a hoarder, 36 percent said they had to clean out a house after a hoarder moved or passed away.

Compulsive hoarding is a disorder that goes beyond collecting or lack of cleaning. Hoarders are unable to stop adding to their piles, and the items end up impeding daily activities. Hoarders may feel emotional attachments to objects that others regard as trash, even while health, fire, and even structural hazards are apparent to others.

These are the most commonly hoarded items:

Among the answers for other, people named boxes, broken-down cars or simply everything. Many people reported seeing items stacked to the ceiling.

Hoarding usually leads to fire or health hazards, according to people who know a hoarder. When asked about specific hazards they have witnessed, people point to:

Fire hazard: 59 percent
Health hazard: 53 percent
Hazard to health of animals: 20 percent
Other hazard: 9 percent. (Respondents often reported trip and fall hazards.)
Efforts to throw out items often backfire when the person who hoards becomes even more resistant to getting rid of the piles. Among the survey respondents who know hoarders, 71 percent have tried to get rid of items. Of those:

Tried to make piles of things to save: 36 percent
Cried or screamed: 29 percent
Weren’t there: 25 percent
Blocked entry: 24 percent
Recalled memories associated with the things: 21 percent
Locked them out: 12 percent
Other: 8 percent.
Left the premises: 7 percent
Hoarding can have serious insurance implications if a home insurance company performs an inspection and discovers the hazards. Hoarding could also come to light during an insurers visit for an insurance claim, such as a kitchen fire or even a claim unrelated to the piles, such as weather damage.

Insurers that discover hoarding will often give a customer a timeline for improving the property. In extreme cases where a hoarder cant clean up enough, an insurer could cancel the policy rather than take the risk of future claims.

By the time your insurance company is thinking of cancelling you, youve likely had fire and health hazards for years, said Danise.

See the full article at http://www.insure.com/home-insurance/hoarding.html.

Insure.com commissioned a survey of 2,000 U.S. adults, half women and half men. The survey was fielded in June 2014.

Insure.com provides a comprehensive array of information on auto insurance, home insurance, health insurance, and life insurance. The site offers an extensive library of originally authored insurance articles and decision-making tools that are not available from any other single source, including its extensive car insurance discounts tool. Insure.com is owned and operated by QuinStreet, Inc. (NASDAQ: QNST), one of the largest Internet marketing and media companies in the world. QuinStreet is committed to providing consumers and businesses with the information they need to research, find and select the products, services, and brands that best meet their needs. The company is a leader in visitor-friendly marketing practices. For more information, please visit QuinStreet.com.